My Journey Through the Captioning and Court Reporting Program – Part 2 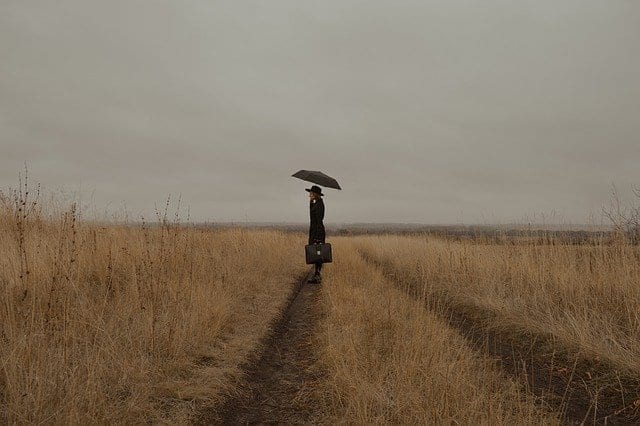 Last month we introduced you to Mikayla who is a student in the Captioning and Court Reporting Program at the Northern Alberta Institute of Technology in Edmonton, Alberta. In Part 1 of our first article, we learned a bit about the program and what interested Mikayla to enter the program.

Now, in her second month at school, we gain a bit more insight into how she is progressing. Here we go…

1) Learning the steno machine is a big part of becoming a court reporter. How many words per minute are you writing in your second month of the program?

Quite a bit of progress was made by the month of October, I would say. By this point, we were given practice audios at three different speeds: slower, normal or medium, and a faster speed to challenge ourselves and help us work towards building our speed.

At the start of the month, we were venturing into 40wpm territory for the “normal” speed. By the end of the month, I usually opted to use the fast audios, which were 60wpm, or at least push myself to work towards them. Sometimes I was able to write them immediately, other times I had to practice using the 40wpm audio before I got the hang of it. It all came down to the difficulty of that particular lesson.

2) Tell us about the words you are learning?

At this point in the semester, we were well into writing sentences as well as multisyllabic words. One of the lessons we had was about the 150 most commonly spoken words, as well as some briefs, which were wonderfully helpful. The lessons during this time mostly focused on different types of suffixes and prefixes, and we also learned a few sounds (such as X or word endings like the “-ch” sound) that required more complex keystrokes to type. 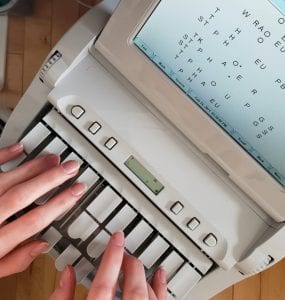 3) Steno is like learning another language. Give us a little introduction to the language and some simple examples of words.

The most notable difference between steno and qwerty is the key layout. The keyboard doesn’t have all 26 letters, so you have to create the missing letters by pressing a combination of keys. For example, the letter D is created by pressing the T and K keys at the same time.

The method of typing is rather neat, too. Rather than writing words letter by letter, you write using syllables. The left side of the keyboard corresponds to the start of the syllable, then you add the vowels, and finish the sound with the right side of the keyboard. All keys are pressed at once.

A decent example would be the word “judge.” Now, because you type using the sound of the word rather than the spelling, this would be written as JUJ. On the screen, however, it would appear as “SKWRUPBLG” because of the key combinations required to create the J keys. Honestly, it is one of my favourite words to show people simply because it looks like, well, a bit of a mess.

Lastly, I feel the most interesting aspect of the language is the usage of briefs. You can write phrases such as “at the time”, “it was” in single keystrokes (TET and T-FS respectively,) and even longer phrases like “after the accident.” This is extremely helpful when writing at faster speeds.

4) What tricks do you use to memorize letter combinations on the steno machine?

It gradually became muscle memory, for the most part. I did a lot of practice drills to build familiarity and limit the hesitation I had while typing. I also made sure to keep track of common errors so I could work to correct bad habits quicker. Overall, despite the different layout and typing style, I would say it’s similar to learning how to type using a QWERTY keyboard. It’s just a whole lot of memorization and familiarity.

We were also allowed to look at a chart of the key layout in the first few weeks. This was helpful at first, but by October most people had the layout memorized fairly well.

5) Tell us about the workload you are experiencing in the course. How much time do you spend on various classes during the day and tell us about what you have for homework?

The schedule differs depending on the day, but on average there are about six hours of class time per week dedicated to typing. It’s pretty evenly split between live dictation and self-led practice. We then have about an hour of class per day that focuses on getting familiar with the transcription software and learning to use the editing features available to us. The remainder of class time is divided fairly equally between English and law. And of course, there’s always the recommended two hours of typing practice after class. It is a fairly heavy workload, although manageable once you get used to it.

The main focus is mostly on the steno and English classes. Of course, the other classes are still important! Typing just requires more time to learn, and English is really important in this field. I did notice more emphasis was placed on those classes, sometimes.

Did you miss Part 1 of our series? If so, read it here. 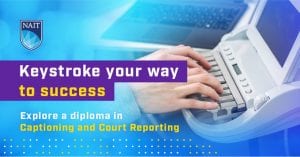 Want to learn more? NAIT offers the Discover Steno series of free workshops that will introduce applicants to the captioning and court reporting career as well as assess foundational competencies for success in the program.

Workshops will be held on Monday evenings and will take six weeks (15 to 18 hours) to complete.